Wholesalekoifarm is a family run business and our koi are sold very quickly! It is important to get on the mailing list to ensure you can take advantage of the deals! 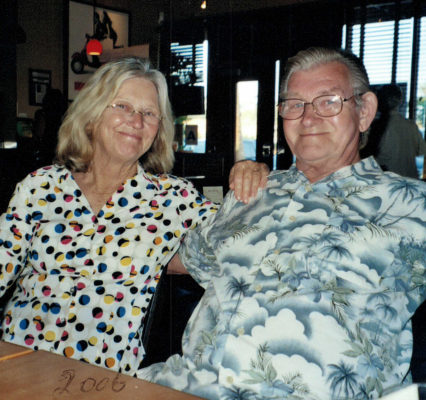 It is a funny story about how we started in this business.My husband Bart visited an open-air market one Saturday.When he arrived home, he was rushing around the house and yard looking for things like a water pump and container to hold water.Bart arrived home and said that he had a big surprise for me and a smiled from ear to ear.I forgot to mention Bart is Dutch.He looked through the yard and barns and couldn’t find what he wanted which was a kiddie pool, spade (to dig), and a water pump.When I asked why, after about the 5th time, he replied that he bought a few koi fish.

I figured he always wanted koi so I tried to help.It is important to mention, we had no pond, no pump, no pool, and no koi food at this point.We both went to different stores to get supplies.Bart went to Home Depot and I went to Walmart.Later that night we had a pool filled with water, a water pump, and something he called a filter.I say something he called a filter because he suspended a new trash can above the pool and had water flowing through it.

It came time to go get the koi he bought.He packed them in bag, one at a time and drove back and forth between our home and where he bought them.I decided to go with him on one trip and he was happy to tell me he only bought 10 or 15 koi; however, he had already brought 15 home.When I arrived, the man thanked for buying so many koi.When I asked how many no one would answer me.The man who sold the fish did tell him the 1,000-gallon pool would not be big enough.I thought to myself oh no.We brought the fish home and I had to go buy another pool and pump.

By the time we were done there were close to 40 koi in the two pools and the koi were approximately 16” and larger.Funny thing, we still did not have a koi pond or koi food!After the fish settled in, a couple days later we realized we only had dog food at home and had to order koi food.

After a month or two, Bart finalized his plan for his koi pond and started digging.A few months later he was digging, the koi are in the pools, and he was complaining about the price of building a pond.Being Dutch he had a hard time spending $1,000 for a filter with little to no work for maintenance and instead built a filter for $150 that he had to clean every month.He smelled after cleaning the filter!

Bart’s health took a turn and he was unable to continue digging his first pond and it was discovered he needed heart bypass surgery.Since his health was not good, we paid someone to come build the pond and finish it.It was the best $11,000 we ever spent.Soon after being built his koi were placed in the pond and thrived for years.Digging the pond actually saved his life since we were able to see that he was not breathing correctly and seek help from the doctors.

We enjoyed the pond for close to 10-years before Bart passed away.After passing away, I decided to import fish from overseas with a federal import license and begin shipping koi around the United States.Today I sell domestic and imported koi at affordable prices making pond ownership affordable for everyone.This is what Bart wanted, to sell koi at affordable prices so everyone can enjoy them.

He felt this way since he tried to buy 10 imported koi from a local koi shop.When the owner wanted him to pay first; he was extremely mad and felt insulted.When the koi shop asked for close to $30,000 for the koi he selected he was even more upset.

Today we tell the story to customers and they laugh.They have been to those same stores which have koi fish (a carp), just with pretty colors, and have seen the koi for sale that cost well more than $1,000 each.

The pictures below are of my grandchildren feeding the koi. 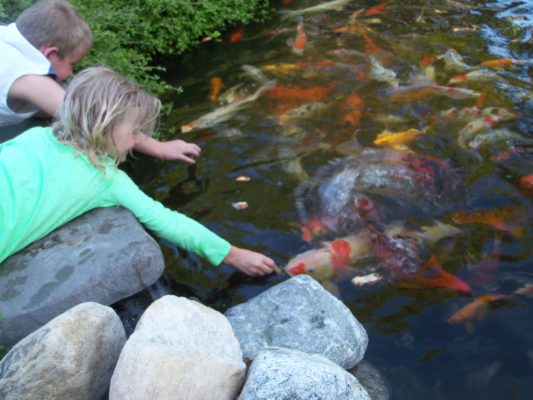